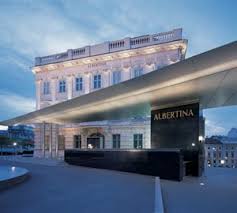 The History of the Albertina

One of the world’s finest art collections has been housed since 1805 in the Albertina, a grand Viennese palace in the Neoclassical style. The palace takes its name from the collection’s founder, Duke Albert of Saxe-Teschen (1738-1822), a son-in-law of Austrian Empress Maria Theresa (1717-80). It was built in 1744 for Count Emanuel Teles Silva-Tarouca (1696-1771).

The Palace of Duke Albert Alongside the Augustiner Bastion, 1816

Archduke Carl’s eldest son, Archduke Albrecht (1817-95), inherited the property in 1847. Towering 11 metres above street level, the palace gained a commanding position in the wake of the demolition in 1861 of this stretch of the old city walls. Over the course of the 1860s, Archduke Albrecht had the exterior remodelled in a historicist style. At the end of the decade, the Albrecht (or Danubius) Fountain was erected at the base of the bastion. The palace passed in 1895 to Archduke Albrecht’s nephew, Archduke Friedrich (1856-1936). Improvements carried out under his ownership included the installation of electricity and a hot-air heating system.

In 1919, the newly established Republic of Austria expropriated the Habsburg palace and the art collection it contained, now renamed the Albertina Graphic Art Collection. Severe bomb damage in 1945 destroyed many of the staterooms, the palace facades and the access ramp leading to the bastion. The palace underwent complete renovation in 2000-2003. The facades were returned to their original appearance, the historical state apartments were fully restored, and the Danubius Fountain was reactivated. Four state-of-the-art exhibition rooms were created. Architect Hans Hollein canopied the entrance to the museum with a spectacular 64-metre titanium wing-shaped roof. Installed in 2004, the daring structure has become the hallmark of the new Albertina.

The 21 Habsburg Staterooms are spread out over two floors of the Albertina palace.

The magnificent Hall of the Muses forms the centrepiece, flanked on either side by stately apartments.

The palace’s original Louis XI décor had been ordered from the royal court ateliers in Paris and Versailles for Duke Albert of Saxe-Teschen’s Brussels residence, Laeken Castle.

In 1822, Archduke Carl had the interiors redone in Empire style, commissioning the Viennese furniture manufacturer Joseph Danhauser (1780-1829) to refurbish the entire palace with fine furniture and elaborately inlaid parquet floors. Of the décor from the second half of the 19th century when the palace belonged to Archduke Albrecht, only the Rococo Room survives. The Spanish Apartments were created under Albrecht’s nephew and heir, Archduke Friedrich. This was the only permanent residence of the Spanish royal family outside Spanish territory. When the palace was expropriated by the new Austrian state in 1919, Friedrich was permitted to take all its furnishings with him into exile in Hungary. The now empty apartments were converted into a study hall, a library, exhibition rooms, depots and office space. In 2000, work began on the comprehensive restoration of the staterooms. The return of the original furniture was secured through successive acquisitions as well as loans from the Austrian Museum of Applied Arts / Contemporary Art (MAK) and the Federal Furniture Depot’s Imperial Furniture Collection. International specialists took part in the restoration work, which was largely concluded by 2007. After decades of neglect, today the lavish period interiors transport the visitor back in time, evoking the age of Neoclassicism and the private and ceremonial lives of the Habsburgs who lived in the palace.

The Hall of the Muses

The Oval Cabinet and Death Chamber of Archduke Carl

THE GRAPHIC ARTS COLLECTION OF THE ALBERTINA

The Albertina safeguards one of the most important and extensive graphic art collections in the world. It comprises around 50,000 drawings and watercolours, as well as some 900,000 graphic art works, ranging from the Late Gothic era to the present. The arc of exquisite works stretches from Leonardo da Vinci, Michelangelo Buonarroti and Raphael Santi through Albrecht Dürer, Peter Paul Rubens and Rembrandt Harmensz van Rijn to Claude Lorrain, Honoré Fragonard and Paul Cézanne. In the modern section, the holdings range across Egon Schiele, Gustav Klimt and Oskar Kokoschka via Pablo Picasso and Jackson Pollock to Robert Rauschenberg, Andy Warhol, Alex Katz, and finally to Franz Gertsch, Georg Baselitz and Anselm Kiefer.

HISTORY OF THE
GRAPHIC ARTS COLLECTION

Duke Albert of Saxe-Teschen (1738-1822) founded the Graphic Art Collection between 1770 und 1822. Deliberately conceived on an encyclopaedic scale and with an educational orientation, it was fully in accordance with the enlightened precepts of its era.

THE HOLDINGS OF THE
GRAPHIC ART COLLECTION

In accordance with its historical development, the Graphic Arts Collection is essentially sorted by regional contexts, or so-called “schools”. Within these, classification is arranged chronologically. Represented in especial abundance are works from the German and Austrian cultural realm.

The Picture Database of the Albertina Museum presents the main works
of the Graphic Arts, Photographic and Architectural Collections.
The historic archives of the Poster Collection are to be found online in their entirety. This database allow for a quick orientation about the museum’s extensive holdings.
Link to the Picture Database…

PUBLICATIONS
OF THE GRAPHIC ART COLLECTION

The research work at the Albertina is concentrated, above all, on the scholarly study and presentation of its own holdings. The results of this research are made available to the public in the form of exhibition catalogues, Catalogues of Holdings and the Albertina Publications.

Permanent Collection at the Albertina

In spring 2007, one of Europe’s greatest private collections of classical modern art came to the Albertina as a permanent loan from the Rita und Herbert Batliner Foundation in Liechtenstein.

The Albertina is now in a unique position to compensate for the major gaps in the Austrian state-run museums’ holdings of international modern art with key works of French Impressionism, Post-Impressionism, German Expressionism, Fauvism and the Russian avant-garde. The Batliner Collection has received acclaim from museums and connoisseurs for decades. It includes outstanding works by Claude Monet, Pierre-Auguste Renoir, Paul Cézanne, Amedeo Modigliani, Henri Matisse, Pablo Picasso, Ernst Ludwig Kirchner, Alberto Giacometti and Francis Bacon. These masterpieces can be seen in a new permanent exhibition at the Albertina.

The Batliner Collection is augmented by works from the Forberg Collection in Switzerland, which was also transferred to the Albertina on permanent loan.

The Collectors Herbert and Rita Batliner

Herbert and Rita Batliner began collecting art nearly half a century ago. Due to their close friendship with the legendary art dealer Ernst Beyeler, French Impressionist and Post-Impressionist painting formed a cornerstone of the collection from the very beginning, along with the work of

Alberto Giacometti. Exceptional works by Monet such as The Water-Lily Pond, Edgar Degas’ Two Dancers, or Cézanne’s Arc-Tal and Mont Sainte-Victoire landscapes attest to the couple’s passion for French art. Picasso became an additional focal point. Today he is represented in the collection with over 40 works, including ten paintings and numerous drawings and one-of-a-kind ceramics.
In the course of his travels, Herbert Batliner gained familiarity with Russian avant-garde art. He and his wife were inspired by the works they saw in Amsterdam’s Stedelijk Museum, the Guggenheim Museum in New York, the Museum Ludwig in Cologne, and the Russian Museum in St. Petersburg, to build their own fine collection of Russian avant-garde art from 1905-35.
The focus of their acquisitions was on Marc Chagall, but they also sought out works by Natalia Goncharova, Liubov Popova und Mikhail Larionow. The collection includes a major work by Kazimir Malevich, painted as a defiant memory image immediately following the artist’s release from a Stalinist prison.

As the collection has grown from decade to decade, so has its recognition within the art world. Herbert and Rita Batliner regularly lent to museums; rare was the Picasso, Monet, Modigliani or Giacometti exhibition that did not include works on loan from the Batliner Collection.
Several years ago the Batliners decided to respect the integrity of the collection by transferring the entire collection to a museum as a bequest. Convinced that extraordinary art collections are no less distinctive, and as such worth preserving, than great works of art, the Batliners decided to make their collection accessible to the general public in their lifetime. The couple derived enormous pleasure and intellectual stimulation from the daily contact they had with their paintings, pastels, gouaches and sculptures, and now they wanted to share this experience with others.

The Batliner Collection and the Albertina

Since May 2009, the Albertina has been presenting a permanent exhibition from its own holdings. This has become possible through the transfer of the Batliner Collection to the Albertina in 2007. Outstanding works by Paul Klee from the Carl Djerassi Collection and major works from the collection of Eva and Mathias Forberg complete the new presentation, which is additionally rounded off by exhibits from other collections handed over to the Albertina. The permanent exhibition spans the most fascinating chapters from more than 130 years of art history, from Impressionism to the most recent present. Paintings by Monet, Renoir, Cézanne, Matisse, Miró, Klee, Kandinsky, Chagall, and other masters offer a survey of French Impressionism and Post-Impressionism, the Fauves, Expressionism, and the Russian avant-garde. With late works by Picasso and exhibits by Rothko and Bacon, the exhibition leads over to the second half of the twentieth century, before it ends with works by contemporary artists such as Anselm Kiefer and Gerhard Richter.

Karel Appel
Face in a Landscape, 1961