The Ocean Environment lets visitors experience the remarkable and limitless diversity of the world that lies beneath the sea.  Using hands-on activities, visitors learn about the physical properties of the ocean such as buoyancy, pressure, density, heat transfer, light, sound, salinity, and oxygen.  A microscope with slides of sea creatures, such as starfish and diatoms lets children and adults see some of the fascinating creatures which make up the web of life in the ocean.

The Naval Undersea Museum has the most comprehensive permanent display of torpedoes in the United States.

The exhibit includes the Howell torpedo manufactured in 1890.  Visitors will see one of the few Whitehead torpedoes on display in the United States.

The exhibit traces the history of mine warfare from the Revolutionary War through the Civil War with a Confederate mine captured at the 1864 Battle of Mobile Bay.  The exhibit interprets and provides examples of mines used during World War I and II, and modern operations.

The museum collects all types of Navy helmet and free diving equipment as well as civilian equipment which relates to Navy use or development.

Currently, the museum has a Women Divers exhibit which focuses on some of the first female U.S. Navy divers.

Outdoor exhibits at the museum include submersibles and portions of submarines:

·The sail of the USS Sturgeon (SSN 637) lead ship of a class of 37 nuclear, fast attack submarines built and operated between 1963 and the present.

·Deep Quest, the Navy’s research submersible which explored the ocean to a depth of 8,000 feet.

The museum’s submarine technology exhibits, currently under development, will interpret the history of the technological achievements made by the United States Navy in the development of submarines.

The exhibits will focus on how submarines operate and how they can be built to provide crew safety and mission accomplishment in an extremely demanding environment. 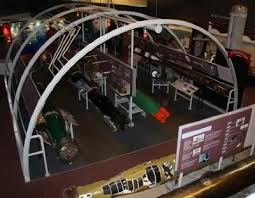